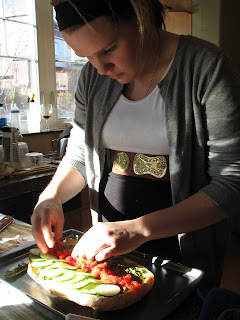 Izzy at work on the Christmas night appetizer. 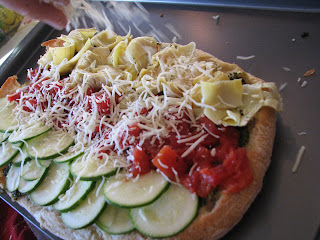 I am alone again for the first time in a really long time. I think it was Dec. 16. It is now Dec. 26 and I have a high need for alone time. I am in Lee's brother's home in Boulder, sitting in silence (except for that damn ringing in my ears which is my constant companion.) It is bliss.

The last 10 days have been "festival days" as the Italians seem to call it - giorni festivi. And that brings its own revved up kind of pleasure. On the 17th, I flew to New York to meet Isabelle (just done with finals at Madison) to spend four days with her and her brother - and, of course, Lee. It felt like a real vacation, which I haven't had since last spring in Charleston with Lee. I also haven't been in the company of both children at one time since June, so that was especially nice. I adore having these grown children. Izzy and I had a fantastic time at the museum, baking cookies for Lee's students, shopping for her Christmas gift (a pair of Wellies rain boots - which are soooo darn cute and practical) and then the coups de gras - the fours of us going to see Billy Elliot on Broadway. Really kind of breathtaking. Cry, laugh, cry - and all done in a very smart kind of way.

Meaning to be home on Sat by 5:00 - but no, nine hours of going nowhere....we were loaded onto the plane with cell phones turned off - and suddenly we learned there were no pilots to fly the plane. Weather. So we unloaded and took the cab ride from hell back into the city (two hours with a car sick daughter.) Up again the next morning at 3:45 for a 4:15 pick up by SuperShuttle for one more shutle ride from hell in an over heated, over crowded van without shocks back to the airport for a 7:00 a.m. flight. Oy. If only this mattered. There were people who had been waiting three days to get home.

Home to friends in Minneapolis, two days of work and off again (another 4:30 wake up call for a 5:15 cab!) to Denver this time to spend the holidays with Lee's family. Arriving on Christmas Eve, Izzy and I were the designated cooks for the next two days. (Only one or two of the Stevens cooks and none of them were around.) We had made a perfectly anal shopping list - down to dividing it by areas of the store - canned goods, produce, dairy, etc. Izzy just rocks when it comes to things like this. So for about an hour, we filled the cart at Whole Foods. The shopping was just fantastic - everything we could have possibly wanted - as much organic as you could ever stand to eat. We had a wonderful time selecting the freshly baked Ciabatta, hearty grain breads, oily Spanish olives marinated with hot peppers, and the most divine Caprese either of us have ever tasted. There were mountains more, but those are some highlights.

We came home, unloaded the 10 bags of groceries and cartons of wine and beer and got to work on the Christmas Eve dinner - totally casual for our immediate family. Chicken chili, amazing guacamole with only lime, garlic and cilantro and flour tortilla chips. Key lime pie for dessert. It was yummy and were all ready for bed at 8:30 because we had been up since the equivalent of 3:30 that morning.

On Christmas morning. we opened a few presents (with emphasis on few this year - which I LOVE!) and got to work on dinner - this time for 12. Since I was working in a kitchen I didn't know, I wanted to do something I know how to do in my sleep, so we made lasagne - two pans of meat, one pan of spinich, a salad with goat cheese, pecans and dried cranberries and Izzy whipped up the most impressive appetizer - the Ciabotta with olive oil, pesto, artichoke, smoked tomatoes and zucchini. She bakes it all for a bit, cuts it into slices and it was just beautiful.

Good news? There are leftovers and so today I can read and nap.
Posted by Alecia Stevens at 3:23 PM