Sex or something more subtle? 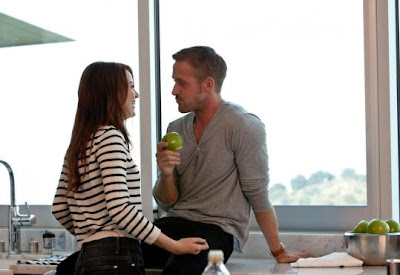 Oy. This is complicated. Would love some feedback! Last Sunday night, Lee took me to "Crazy, Stupid Love." Now, we go to about 2 movies a year, rent a few. That's it. We are pretty out of it with movies now. But after being locked inside our air-conditioned apartment for a week of 100-degree temps, we had to get out. We even skipped dinner and ate the stupid salty popcorn which didn't settle with me.

So, Steve Carrell - funny, right. Julianne Moore - love! Ryan Gosling - a whisper of an awareness that he exists, but now I know he has the body of a god. Like the David. Incredible. Too perfect, really. Emma Stone. Darling. Those eyes. So it seems a recipe for success.

Okay, but the movie is kind of dumb. I just kept looking at Gosling's perfect (really) body and thinking....well, duh, he hired a trainer and worked for 6 mos to a year to get it. He's 30. If you can't look perfect then, and you have the money for a trainer, when will you look any better? Seemed a little contrived. BUT, I was grateful that, for a change, the sex object was male instead of female.

I thought I was enjoying it, but it was only momentarily pleasing, not satisfying in the long run. In fact, it was kind of annoying. Too long, too cliche, too many hot women at the bars that Gosling was constantly hitting on for indiscriminate sex. His line was simply, "Let's get out of here."

Then, on Wed and Thurs this week we watched Roman Holiday (split it up to maintain our 10:00 pm bedtime) Well, it was fabulous. Give me Gregory Peck in a loose, beautifully cut suit (clear that it inspired Armani) any day over the perfectly-purchased body of a masher. (Perfect male body seems not so different than a woman buying breasts.) Gosling's hot, of course. But he's a predictable ass until he has an epiphany of love in the end, which is also predictable.

Gregory Peck is neither boring nor an ass. He's classy, he's covered, he's charming. He's smart. He's respectful. Respectful when he tucks the inebriated Ann into his bed while he sleeps on a chaise nearby (in pajamas of course.) When did we last see the story of a couple who meets, feels attraction, but holds it - like tantra? So much more interesting and sexy.

People fall in love. Of course, people also have indiscriminate, uncommitted, sometimes hot, sometimes not, sex. Love seems vastly more interesting to me. That was the charm of Roman Holiday - love that couldn't be lived, but was deeply felt. With Rome as the setting.

One reviewer criticized Crazy, Stupid Love for not enough sex, for being prudish. (It was a man. :-) Any thoughts on the whole topic of sex and love in the movies? Would love to hear - what are your favorites? What movies bug you?
Posted by Alecia Stevens at 9:15 PM