The Best Thing About Getting Older - KORK-EASE all over again. 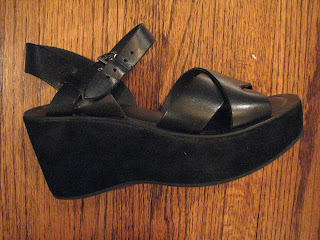 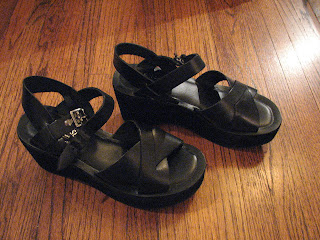 Well, of course, I never thought I'd see the day. In 1976, I bought my first pair of Kork-ease at the fantastic store where I worked right out of college - Things, Things & Things in Iowa City, Iowa. It was the Bendel's of Iowa in my personal opinion - quite unique with a variety of wonderful little shops within the larger store...children's toys (including the lovely Steiff bunny puppet), a deli with the most divine brownies with brown sugar icing, a gift shop with fabulous cards and stationary and a women's and men's clothing department. The owners were ahead of the times and I was lucky enough to land a management / buying job out of college. We sold Kork-ease and, not only were they the only shoe I could stand to wear for eight hours on my feet, they were quite fashionable - or the women at Things made them so in Iowa City. (Don't laugh - Iowa City was very, very hip in the 1970's and it is again today since Iowa is only the third state to allow gay marriage!)

I wore Kork-ease for their comfort and for their looks. I was petite - okay, short; I could use a little height. And they were a wedge. There was the low wedge and the high wedge. We mostly sold the high wedge. It added a good 3" to my height. I was 5'6" in my Kork-ease. Wow.

I probably had four pair of Kork-ease in the 1970's - maybe six. Basically, they were the only shoe I wore when you could go without socks. I may have bought one new pair a year for 4 - 5 years. Then, I moved - and, although I worked for another women's clothing shop - started by one of the owners of Things - we did not carry shoes. No more Kork-ease. They either weren't being made in the '80's (era of gold sandals) or they just weren't in my neck of the woods.

A few years ago, I said to my sister, "You know, I think it's time to bring Kork-ease back. How do you do that? All this hippie stuff coming back again - you gotta have Kork-ease."

Well, wouldn't you know it? Last year I read that they were back - Neiman's had them last spring. I ordered a pair but couldn't quite get with the wedge, so I returned them. Now it is a year later and I've been seeing lots of wedges and I can do it this time. I bought a pair today!

I feel like it is old home week. In 1976 - 33 years ago!- I bought my first pair of Kork-ease. I was 15 pounds thinner (at least) and didn't have a turkey neck, but, hey....you only live once....and if you really like something, aren't you lucky to get more than one shot at it? They were my favorite shoes of all times - like a favorite boyfriend. I am so happy to have them in my closet again and I hope I don't embarrass Isabelle wearing them at 55 (instead of 22!) but, when I tried them on, they felt like home. Home. Just like home.

Age is all in the imagination. Just google Anna Piaggi and look at her. God love her and God love Kork-ease!
Posted by Alecia Stevens at 8:37 PM