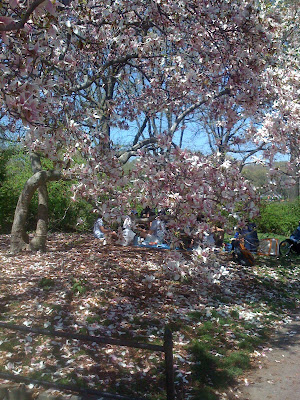 Friends picnicking under a Magnolia in Central Park. 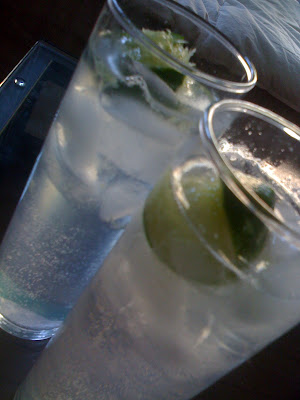 Gin and Tonics - the first of the season. 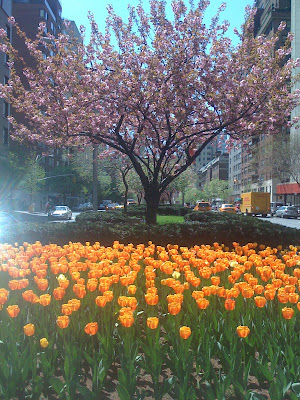 My sister, Holly, reminded me of a line from "You've Got Mail." Tom Hanks is talking to Meg Ryan. He's in NY, she's in Seattle. The topic of a visit to NY comes up, she is either busy or hesitating and he says (paraphrased,) "Well, it would be tragic to miss Spring in New York."

Now I know what that means.

I cannot say for sure that it is more beautiful than Spring in Charleston, South Carolina, but maybe more noticeable because the weather is less hospitable preceding it. We have something like winter in New York (though nothing like winter in Minneapolis.) Maybe it is an East Coast thing - I've heard tales of the Cherry trees in DC and seem them in photos. Maybe it is a "Zone" thing - you know...just more tolerant of more flowering trees. Whatever it is, I'm taking it.

It was 89 degrees in New York City today. This weekend was like a movie CALLED "Spring Break" - like Cancun in New York. People were lolling around in bikinis and men were shirtless and babies and dogs were everywhere in Central Park and street musicians (the good ones) were out in force and dinners and brunches were given with windows thrown open without screens so you really feel like you are part of the outside. The flowering Crab Apples against the red brick buildings of the West Village filled the view of the open frame. A crimson cardinal stopped to decorate the pink powder puff of a tree. Surprisingly large turtles ventured out in a garden after a long winter's rest to entertain us. Asparagus was on menus, along with poached eggs and lamb and cake with strawberries and whipped cream. There were no empty outdoor tables at restaurants between 4:00 and midnight. The Greeks celebrated along 5th Avenue with a parade. Necklines plunged and dresses were long and billowy. We broke out the gin and tonics for the first time this year. We walked until we had blisters because bare feet are in sandals again. We all suffer unrepentant sunburn because none of us have sunscreen in our medicine cabinets for the season. We will all sleep well tonight.
Posted by Alecia Stevens at 7:45 PM