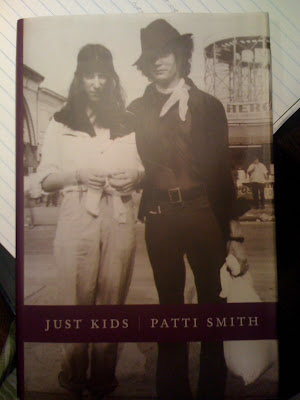 It was the late 60's. You could be homeless in New York and not be weird. Patti Smith was that. I don't really get it because I'm a farm girl from Iowa who was terrified of going to Iowa City for college .... I couldn't imagine going to New York City then. (But, she was a New Jersey girl and ggod at following her heart.)

She met Robert Mapplethorpe in a Brooklyn flat the first day she was there but didn't get his name. Quite coincidentally (especially in NY) she ran into him a couple of months later in the East Village and recognized him, so she stopped him on the street. They had an immediate connection and became friends, soulmates, lovers, and muses for each other.

If you want a great history of New York in the late 60's and early 70's -- stories that include Joplin, Jimi Hendrix, Lou Reed, Sam Shepard, Dylan, Andy Warhol, Dali, and people I whose names still mean nothing to me -- this is a book for you. I like the narrative, but I rather wanted a bit more juice, more feeling. I do think it gets stronger as she gets closer to the end - when he dies. It is incredibly touching and makes you believe in the concept of soulmates.

If you like music, culture, art and were ever a hippie or thinking of being one -- this is a book for you. I sort of hung out on the fringe of hippeville in Iowa City, but still find it interesting. I had friends dropping acid while I cooked. I was way too scared to try it. (Oddly, Smith is very much the same - not interested in drugs much at all, while Mapplethorpe drops acid to go meet her parents because it relaxes him!) Give me a nice glass of wine. Even a joint a couple of times a week back then, a little Joni Mitchell. Anyway, you'll get heroin, hustling, homosexuality and the loft scene in New York in the 60's where there were no toilets. You peeed in a cup. Everyone lived like this in her world, it seemed.

The biggest surprise???? That Patti Smith had a relationship with Sam Shepard- she didn't know who he was when she met him. He was brilliant and gorgeous - then, too. A good combination. And seemed like a good enough guy. Lucky her.

Pick it up. It's a quick read and great party conversation...
Posted by Alecia Stevens at 7:37 PM