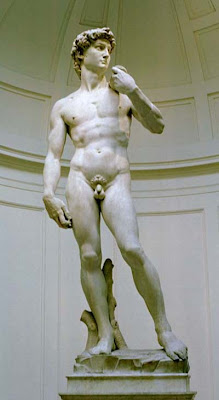 David at the Accedemia in Florence, Italy.

I am writing a memoir. It's a lot of work and involves lots of insecure moments wondering "Why are you doing this? You are not really a writer." But, like in a yoga class, I observe the thought and let it go when I can.

Anyway...the book is about being a late bloomer. I didn't really know what I wanted to be or do until I was in my 50's and I didn't find the love of my life until I was in my 40's. It involves a lot of looking back at how I was raised - on a farm in Iowa - in a very naive, innocent way. This was both wonderful and problematic. It was the wellspring that fed my artistic imagination, but it was also the ball and chain that kept me making choices that were safe. I was very happy as a big fish in a small pond. I was terrified of anything else.

I never traveled. I left Iowa three times before I was 22. Once I went to Milwaukee to visit relatives. A second time I went to Minnesota to ice fish with my grandparents. Alecia's big trip was to Disneyland with my family in a camper when I was twelve. My father had won a trip or, trust me, we never would have gone.

I did not leave this country until I was 53 years old. I was a big baby about flying - especially across the ocean, so I just avoided it, but I could feel my life shrinking. So, as you might know from a previous post on my fear of flying, I got a prescription for Xanax and took the leap and ended up in Florence, Italy for a month. In Florence, Lee and I enrolled in a course called "History of Renaissance Art" offered by the British Institute of Florence. Well, it knocked our socks off and, especially, I will never, every forget the first time I saw the David and Michelangelo's Slaves, all at the Accademia.

So...as a parent, I fight tooth and nail to give my children the confidence to travel, to move away from home, to explore the world. I was never, ever given this gift. (And I still will tell you I had wonderful parents.) I am the father who wanted to be the quarterback but never made it, I am the sagging ballerina who wanted to dance the role of the Swan and only made the corps. I pushed, kicked and cajoled my children into trying new things. And, lo and behold, they did it.

Zan went to Paris at nineteen for a semester abroad. I was too poor at the time to visit him, but lived vicariously through him - at this time, in 2005, I still had not been to Europe. Isabelle is now spending an entire school year in Madrid. I talk to her by skype about four times a week, maybe more. I am so happy, I am like a jumping bean when I think of what they, especially she (as a young woman) is learning about navigating the world.

So, this week, I had a little epiphany, a moment when I realized how profoundly travel and living in another culture (including "other cultures" in the US - look at the differences between the South, the Midwest, California, Colorado, New York and Texas!!!!!) informs who you are, fills in the cracks, allows for fluency in the languages of a culture - let alone fluency in another literal language, which she now has. Here's the little story:

When I was in Italy (now it has been three different trips to Florence) I always, always go see the David and the Slaves at the Accademia. I love them both so much I would like to eat them! Well, Isabelle was in Florence over her winter break with friends. I told her she had to go see the David, of course. So, she did (and who wouldn't?) After her trip,we were chatting about that experience.

"It was the best art I saw on the whole trip. (She had been to Rome, to the Uffizzi in Florence and to Venice.) It was so cool, Mom, because it was a show of a modern photographer. I forget his name. Robert? He photographs men."

"Yeah. Yeah, that's it. Anyway, it was so cool - it just rocked. You thought you were just seeing this photography exhibit, then, suddenly, you enter into this great hall and there is the David and you don't expect it. It was gorgeous how they played off each other."

I was tingling. I knew very little about Robert Mapplethorpe. I knew that much of Mapplethorpe's work was homo-erotic. That's about all I knew. I couldn't claim to know his oeuvre. But, I kind of got the connection she was describing. And was so happy that, for Izzy, a young modern woman of 20, she was able to make a connection with the 16th Century work of Michelangelo through a 20th Century photographer (who was really my contemporary, born in 1946.)

This week I began reading Patti Smith's memoir, Just Kids, about her life in New York with Robert Mapplethorpe. And, what do you know?????? He was obsessed with Michelangelo! He was especially obsessed with the Slaves sculptures (which were also my favorite), the sculptures meant for the Pope, which were never finished, and are so starkly revealing in that state. They seem ultimately modern. He plastered their walls with images of the Slaves sculptures.

So I am so excited to learn this, I email Izzy. Today we discussed the whole darn thing. The amazing connection between Mapplethorpe and Michelangelo and the amazing fact that I read about it.

I know this is really a little thing. But there was not the remotest possibility that my own mother and I could have had this conversation when I was 20 or 30 or 40 or 50. She has never traveled to Europe - only to Canada. This happened because I transcended the boundaries that shackled me as a young woman and because I did not pass them on to my daughter as a legacy. Just this simple fact that we had both stood, in our own time, in the same room in Florence, looking up at the David, soaring to the heavens. That we could talk about it. That we understood the connection between Mapplethorpe and Michelangelo. I wanted to weep. Those moments when the electric current of life sparks between you is both tender and magnificent. I don't know if Izzy saw it, but it was a watershed moment for me. I imagine she is taking it for granted at this point. But, to me, it is a miracle and a gift and takes great courage to leave the nest and I want to be sure that she understands both the risks she is taking and the privilege it affords. To our children, that they may not be afraid.
Posted by Alecia Stevens at 6:45 PM