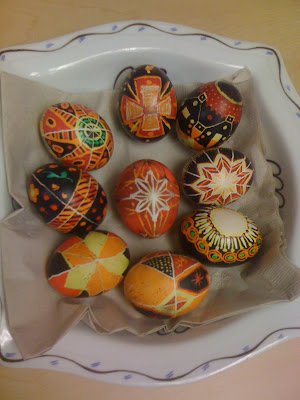 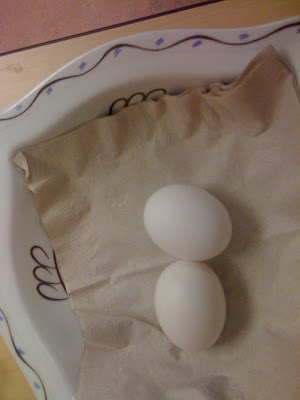 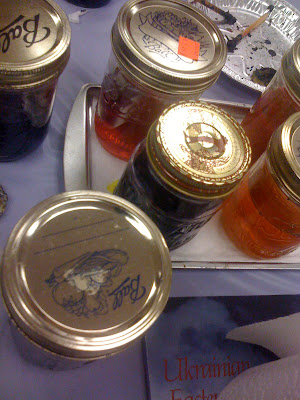 The dyes for the eggs. 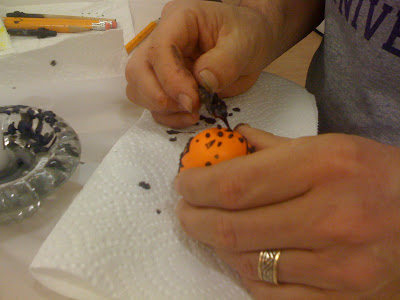 Lee working on his egg. 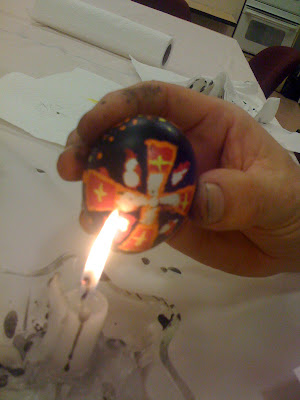 Taking the wax off at the end.


Lee has always loved the Ukrainian Easter eggs - they are called pysanka. When I learned that the Ukrainian museum was teaching a class on making them, I mentioned it and he wanted to go. It happened to fall on his birthday, so I made the class part of his gift.

We began with a wonderful movie, a history of the psyanka. Eons ago in this part of the world, the pagan religion held that the gods showed favor to the people with the return of Spring. The people wanted to show their gratitude and decorating eggs was one of the ways to do this. They were painted with symbols - of the four corners of the earth, which later turned into a cross, a swastika, which was a solar symbol of good luck, and the star rosette, a sign of endless spring mimicking rays of the sun.

It is similar to batik, a process using wax with a small metal tool to cover the areas of the fresh egg the artist does NOT want dyed. Then the egg is dipped into the dye, pulled out and dried. Another layer of wax is added to preserve THIS color, then dipped into a new dye. The process was repeated 4 times - using yellow, orange, red, then black. Some chose to use a bit of green in special places. Well, my little egg cracked along the way - I was the only one to have that happen - I was having kind of a bad day, anyway. :-( At the very end, you hold your egg over the candle flame to melt the wax, wipe it away and reveal the masterpiece.

But, sitting in the room with 10 people, working quietly, talking, hearing about where people live and work - it was a very sweet thing. And here you see our eggs, even my unfinished one.