Last night Lee and I went to see the movie, "Bill Cunningham NEW YORK". As a dedicated fashionista, I could hardly wait to see it. Bill Cunningham is the 81-year old New Yorker who rides around the city chronicling the fashion on the street for the New York Times. He's worked for the Times for decades, had an unhappy stint at WWD (Women's Wear Daily) in the '70's and an extraordinarily creative position with the original Details magazine, where he was given free reign to do whatever pleased him - much to the benefit of the reader.

Every Sunday, I sit with my coffee, turn to page 4 of the Styles Section before looking at anything else, to see what fashion trends Bill has seen on the streets this past week. He shoots in New York traversing the chaos of that city by bike. On and off all day long and well into the evening to shoot the charity events, he snaps photos of shoes, hats, full outfits, legs, decollete - generally looking for people with great, great style. (He's on his 29th bike now as the other 28 have been stolen.) He goes to Paris twice a year "to fashion school" - referencing the fashion shows.

But his real love is not the model and he actually seems to disdain the celebrities "in their free dresses!" He passionately loves the everyday woman (and man) on the street, with their budgets (some of them large! others not so...) their creativity, their courage to express themselves. He passionately loves people of all ages. He followed Lady Astor to her 100th birthday. He follows Annette de la Renta, Diane Keaton, the Laurens, and two of his personal favorites, Anna Wintour, of American Vogue and Anna Piaggi of Italian Vogue. 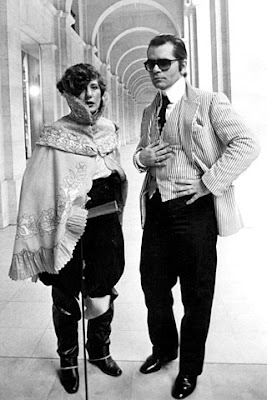 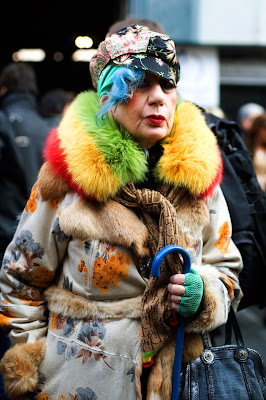 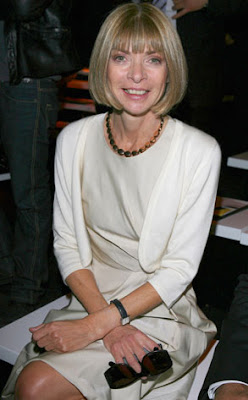 (None of these photos were taken by Bill, but give you an idea of why he might want to photograph these women - and they aren't 20!)

I really don't want to say more - to give anything away. IF you love fashion, this movie is a must for that reason alone. Bill Cunningham may be one of the most important people in the fashion world. If you just want to see something lovely, something uplifting, something that isn't about nuclear radiation poisoning or Bin Laden or something that Donald Trump, Sarah Palin, or Michelle Bachman said that sends us all running for the bottle - then you will love this movie too.

I have to add one thing. It really made me miss New York. I liked Rome. I HEART NEW YORK.
Posted by Alecia Stevens at 5:21 PM