Joseph Campbell is not surprised. 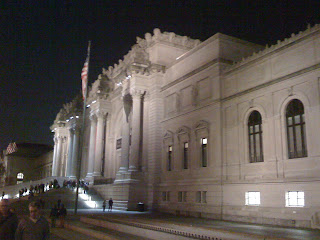 The glorious Metropolitan Museum of Art - a cathedral to the imagination. 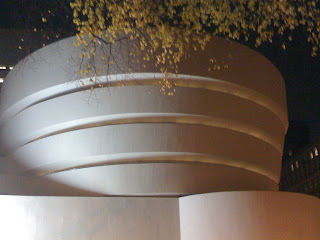 The stunning Guggenheim Museum by Frank Lloyd Wright, designed in the late 1940's, completed 1959 - a cathedral to the future. 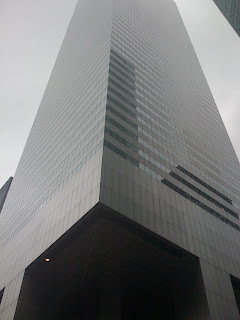 I'll tell you what this is at the end.
I love architecture and what it tells us about ourselves and what we value. It is the primary reason I love Charleston, South Carolina and Florence, Italy and Brussels, Belgium. And New York. Unfortunately, Minneapolis gets a sad face :-( for its insensitivity to local architecture. It's all just "tits and glass" I say. Lots of new flashy stuff. I am a fan of old mixed with new.
I've been scooting around New York with my iphone on high alert to capture the architecture that calls to me - something that actually says something to me about how the form defines a value. So last night (during a hormone-induced sleepless night supercharged by 2 Extra Strength Excedrin at 8:00 p.m. to juice me up on caffeine) I played some of these images over in my head and here are three:
Once or twice a week, Lee wanders the collections at the Metropolitan Museum of Art. One week he meditates on a Dali, the next, he studies a small statue of Isis nursing her son Horus from the Egyptian collection, an image from 3000 years ago, then noodles his way like a homing pigeon to the Italian collection to find a Fra Angelico painting of the Madonna and Child in the same pose, only this time it is Mary and Jesus and it was painted in the 15th Century. I join him whenever I am able.
Joseph Campbell, during his time at Columbia studying Mythology, must have found a muse or two living in that museum. It was Campbell who first introduced me to the idea that architecture tells the story of a culture.
"You can tell what's informing a society by what the tallest building is. When you approach a medieval town, the cathedral is the tallest thing in the place. (FYI - my own note - The churches are still the tallest buildings in Charleston, SC.) When you approach an 18th Century town, it is the political palace....And when you approach a modern city, the tallest places are the office buildings, the centers of economic life." - Joseph Campbell, Power of Myth
So, after spending an evening at the Met, i snapped a photo of it on my way out, then walked up 5th Avenue just 6 short blocks to show Lee the Guggenheim, which he had never seen, and is particularly spectacular at night. It looks like a spaceship wedged alongside Central Park, a completely unlikely form landed among the highbrow Upper East side limestone mansions.
I shot a photo of that too.  I loved the diversity of form, but am moved that both of these buildings, one built at the turn of the 20th Century and another built on the cusp of modernism in the middle of the century, still call us to its doors because of the transformative experience that is possible when communing with art.  For me, it is not unlike a religious experience - there are the place, the rules and the rituals (don't touch, be quiet, step aside when you are done.) And in the end, the ritual may touch or change us.
The final building is one I saw yesterday while walking home up 3rd Avenue. The timing was exquisite because only a day before, the government had swept in to save the bones of this business from breaking apart - it was the Citibank Center. For the next few blocks, every building bore the Citibank name. I snapped the shot - aware of the drama and the height, but not of beauty or thoughtfulness. It was a kind of phallic expression of power. IF it was built in the 1980's , which is my guess, it makes perfect sense when, under the spell of excess (whether it was the size of our shoulder pads or balance on our credit cards) we built our cathedrals to the gods of greed.
Not to be too puritanical, but hey, you know the old saying, " You shall not make for yourself an idol..." Well, I think we all had a little money idolotry going on, don't you? I did my part. I bought a bigger house, a big old SUV, a Mercedes, and ran up those credit cards. In the end, we learned how shockingly UN-satisfying it all really is.
So, are we surprised, really, that the cathedral to wealth would tumble while the cathedrals to the imagination stand?  Maybe the point is to have the intention in the building and to respect the power of our architecture and know that false gods will always disappoint. It is also no surprise that the terrorists hit us there - they fully understood our myth.
Posted by Alecia Stevens at 4:25 PM