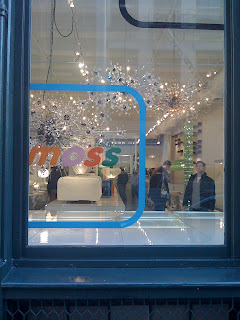 Moss - must be the most uber cool store on the planet. In SoHo on an equally uber cool street called Greene with cobbley bricks for the street and old 19th Century storefronts that make you think you are in Amsterdam or something because it is all just so darn cool with art galleries, Italian furniture stores, Jack Spade's shop (Kate's brother) and great little coffee shops. Now I think I live in the stuffy part of Manhattan on the upper east side, but it is QUIET. Maybe quiet and stuffy go together. 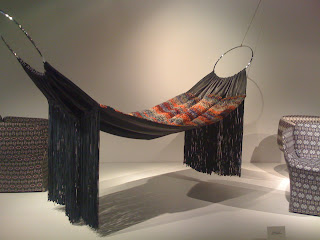 This just rocks. Leather with some amazing native weaving. 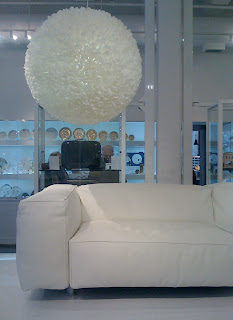 oh, its another cool Italian thing or two.

So it's Black Friday (that really sounds depressing to me; could they call something a little peppier?) I am proud - actually, I feel smug - to say that I did not spend one single cent today. Now, that is a miracle. There is just no other way to say it. You simply cannot go a day in NY without spending something for something. A bottle of wine, a cup of coffee, a little something for dinner, picking up the laundry....it is just crazy. So, I am thrilled that my larder was filled and there was wine in the apartment and I made my own coffee and didn't need a thing.

And all the more miraculous, because Lee and I went downtown and went to a shop called Moss that is just about the most amazing design store I have ever seen. Of course, the one thing I wanted turned out to be a set of 4 dining chairs and, darn it, they were $4900 EACH! So I passed.

I just heard about the poor man trampled to death at a Long Island Walmart when the shop opened at 5 a.m. to a crowd that literally broke down the doors and crushed him. Another woman missed Thanksgiving dinner last night with her family (who were upset about it) to camp out at a store. God help us.

This makes me want to throw up my leftover turkey dinner.

"well.....rip that smug smile right off your face, honey. You probably spent more on those tickets than the average person spent in eight hours of shopping at walmart even after stampeding someone to death."

Oh, fiddle. Just when you think you are superior, it comes back to bite you in the ass.
Posted by Alecia Stevens at 5:31 PM