Signs of Spring and Hope. 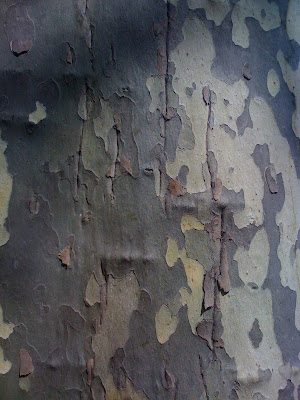 This is a tree I found in Central Park - must have been the original inspiration for camoflauge!
Isn't it cool? 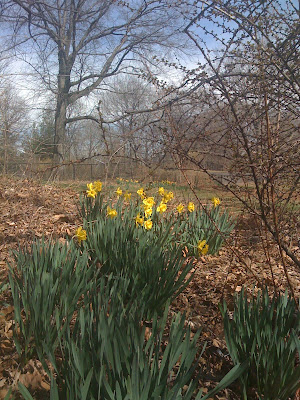 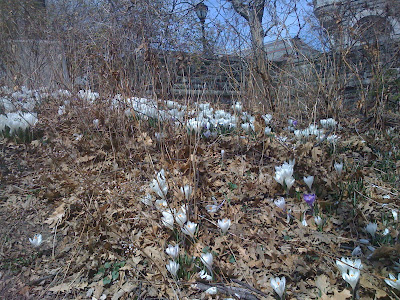 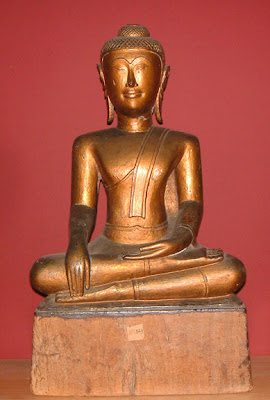 The beautiful Burmese Buddha from DeVera - the gesture symbolizes enlightenment, the moment of triumph.

It was a cold two weeks. It hit 70 in Charleston one, maybe two days we were there. Back to New York and the temperatures dipped and I was not prepared to wear my Northface for still another week. I didn't pack gloves or scarves for this trip. Aren't we done with winter yet? But there are signs. I saw it at the park this week. I saw it on the streets today.

We had a wonderful day. It was in the '60's and Lee (who is still getting a lot of mileage out of a two-week spring break) and I (who will be fully ready to go back to work on Monday) decided to really make this the last hurrah of his vacation. We caught the 6 train down to Soho, got off at Spring and as we emerged into daylight around noon there at Spring and Lafayette, the world was buzzing with people. I have learned my way around Soho a little bit - I was there yesterday with a friend - and wanted to show a couple of my favorite spots to Lee. We have found we are better with a PLAN - not just wandering. We are not copacetic wanderers.

De Vera, at Crosby and Howard, is the most amazing collection - and display - of objects I've seen anywhere. It caught my attention when I saw a white cast plaster copy of a Della'Robbia infant stuck to the outside of the black exterior. What is that doing there? How odd. It was a favorite image of ours from Florence where this swaddled infant is on the exterior of the orphanage. So I could hardly imagine what it was doing here in Soho on an old warehouse. Once inside, it all made sense. The owner is just a mad collector of all kinds of things - especially European objects. The older the better. I found a beautiful 19th Burmese Buddha (maybe for a client?) For me, it is just a joy to see these beautiful things.

Then a hop across the street to Ted Muehling. Well, there I do admit to having the "Gimmes". I love his jewelry. And I love the shop. Who thinks to put two huge coral-colored lobsters on the floor under the display case on an old worn floor?

Next BDDW (this is next door to DeVera.) The last time I was here was the day I got the three alarm text that Lee needed me - and he ended up in the emergency room en route to full admission to the hospital for three days. So my visit was cut short and I wanted to go back. The furniture and show room (like the other two shops we visited) are so creative that it makes me hopeful for mankind. The wood finishes may be the finest anywhere. They are known for their organic tables with heavy bronze bases.

All of these shops brought up one thing. Surely, if we can do things like this with our head, heart and hands, we can fix this stupid financial mess, we can stop war and we can take care of our planet. There really is no excuse. It was a clear reminder today that humankind is very resourceful and creative.

On to Balthazar for lunch - apparently with the rest of Manhattan. Wow. A 45-minute wait at 1:00 (I guess I should have known.) The city had already punched the clock, it seemed. People were drinking gin and tonics, wine, champagne. So, not to spoil the party, we had drinks with lunch too. ( I never do this because I fall asleep.) It was yummy and very, very crowded. Crowded like you feel you are dining with the person NEXT to you, not across from you. We had a charming pair of men on one side who joked warmly, "How nice to have lunch with you," and smiled, then broke off into a language I didn't even recognize. Lee said Portuguese because he saw a passport, but I know I heard those gutteral Germanic sounds coming from the guy next to me and I think really they just spoke in about four different languages throughout the meal as I tried to figure out how exactly to get the lobster in my bouillabaisse out of the shell without splattering all over them and making a complete fool of myself. I finally gave up. The men to my right I wanted to slap. They were gay (just an observation, not a judgment), very, very loud (so that I often could not carry on my conversation with Lee) and the one in the pink shirt talked only about himself. Me, me, me. He was an actor and, Lee pointed out, spent a lot of time in LA because he was talking about it. Oh, really? I'm so surprised. An asshole from LA?

With the beautiful weather, we decided to get off the train early and walk home and it was just the ticket. We walked up 5th and saw the buds on the trees getting ready to sprout their color, people with jackets off, and both of us pinching ourselves that we have had two weeks to just be together like this. Tomorrow I go to Minneapolis and I always feel such a bitter-sweetness the days before I leave - so lucky to have had this time, but sad to leave Lee.
Posted by Alecia Stevens at 4:25 PM