My new "dressing room / guest room / storage room." Previously Izzy's bedroom. I'm the mother from hell - I take over my daughter's room the minute she moves out! It's a Freudian theme. I just saw "Freud's Last Session" (a play at a YMCA on the West Side) in NY this week. 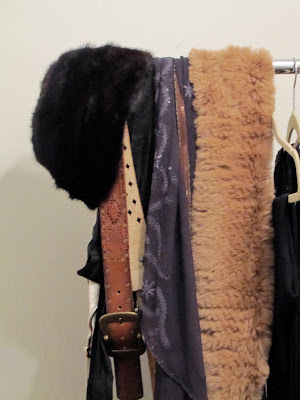 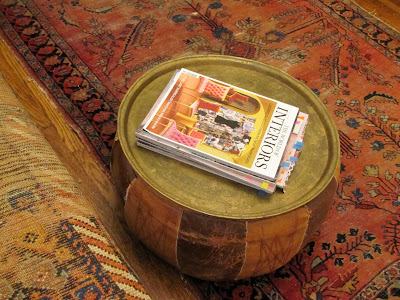 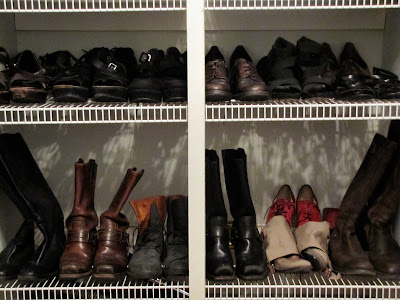 Wow. I even have a place for all my shoes. I, sadly, never get rid of shoes. Many of these are 18 years old and from consignment stores. Hey, things come back.

I have a biological clock that tells me it is "back to school time." Every end of August, from the time I was five and preparing for kindergarten with Mrs. Klesspie, I have been aware of my clothes. Now, I should probably be clear: we didn't have much extra for store-bought clothing when I was young and living on my grandfather's farm. My mother and great-grandmother, Lulu, made most of my clothes. My Grandma Fern bought be a dress now and then. But, I have a distinct memory of shopping in Marshalltown, Iowa when I was only five, for a few things for school. And, of course, I would go home and put them carefully into my little cupboard of clothes.

Later, by the time I was 12 or 13, I was making all of my own clothes and started madly designing what I wanted for fall after scouring Seventeen Magazine. Then, I would collect the fabrics and trims and get to work re-working patterns to get just what I wanted.

SO, Lee and I got home last night after 8 days in NYC (which was fantastic, btw!) On our arrival, the cats had made a mess of the place. I won't say more, but even with a "caretaker", the only thing worse might have been a dead body in the living room, having been dead for a week. We cranked the AC - opened windows, sprayed lavender around the place, lit Nag Champa and Aveda candles. The worst was Izzy's room where she'd put the catbox when she left for school. We scrubbed it like we were alter boys cleaning the chalice for communion.

Izzy had moved to Madison in our absence, so her uber messy bedroom was suddenly ours to do with it what we needed. (We've been storing my office supplies in our bedroom on the floor all summer.) Since we brought all our clothes back from NY we both need more closet space. So, I decided to take over this free room, turn it into a combo dressing room, storage room, and guest room. All in some crazy version of Freudian style.

Lee was napping while I did this and I was a little worried that he would think I was being selfish for taking it over. (He could seriously use a real office!) But...he loved it. Thought it looked like a great reading place.

When we eventually get a guest - I roll out my clothes rack and make up a cozy bed. For a couple, I'll just buy a second twin mattress top plop on top of the one we have. Then, we flip it out and...voila! It's a king size bed in a miniature room! Who cares? You're sleeping!

SO, here's my groovy "dressing room". I've never had one! Have I ever even had a closet to myself when I was in a relationship? I don't think so....

The fur hat...that's a story for tomorrow.
Posted by Alecia Stevens at 8:48 PM