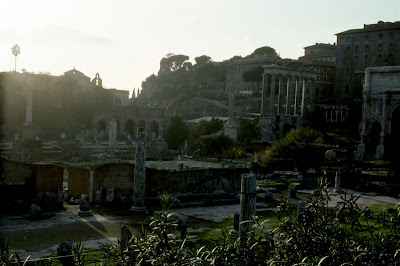 Lee and I have been talking to Izzy about freedom. Here's Lee's story:

In 1972, Lee went to Italy (his first trip to Europe at 21 years old.) He went to some sweet little spot on the Mediterranean called Salerno to study Gestalt. He was there for several months. At the end of the course, he spent 10 days in Rome. This is what he said to Izzy today...

"After spending 4 months in Italy, I spent the final 10 days alone in Rome. It was such an experience of freedom. I came to know the city in a way that I was comfortable. I could depend on myself. I had never known anything like it. Then I went home to Kalmazoo. I had worked at the Upjohn company before I left - which is how I made the money to go. I arrived home on January 6 and had no idea where to land. I applied for a job at Upjohn because it was familiar. I got a job and showed up. It was like walking into a concrete prison. After the expansion of Rome, here I was in corporate America. I never felt so deflated in my life. The freedom I felt in Rome was gone. Like that."

Lee told Izzy this story because we were talking about her own experience of Europe - what it was like to be back. Then, we all started thinking about what freedom feels like.

I remembered my experience from a week ago - swimming in Lake Superior. That felt like freedom to me. I felt ridiculously at one with the water. I felt fourteen. I felt my body. I even liked my body.

When else have I felt freedom? I felt it in Florence in 2006 at 53. It was my first trip to Europe. (I know...I am really a late bloomer.) I hit the ground running. I just got the city. I can't even explain it. I just felt at home.

I often feel freedom in New York - managing the city. It is powerful to be able to navigate and move around and find my own way there. I feel freedom walking around my neighborhood there - from the apartment to the library with my backpack full of books and notepads. I love how no one cares who I am - which gives me the freedom to be whomever I want to be. New York is freedom to me.

I remember feeling freedom riding my bike around Charleston, SC in the '80's. What a magical place to live as I was turning 30.

What is freedom for you? I'd LOVE to hear about this! PLEASE, don't be shy. Write.
Posted by Alecia Stevens at 9:03 PM