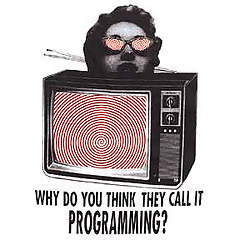 Lee and I have noticed over the past year as our work seemed to take on a life of its own, that we watched less and less TV. Now, to be sure, I only watched the news anyway. Really.  He watched news, assorted sports and Breaking Bad.

But, the news started bugging me. I felt like, first, what I was doing when I stopped doing it was more interesting than the news. So, that habit stopped some time last fall. Whenever  I did catch a piece of it, it seemed kind of stupid. I felt like the news people were almost condescending but frosted with a gooey niceness. I felt so cynical about it.

But, alas....the NFL. Lee has watched football since he was a kid so he had to have the NFL. Last Sunday, he watched the Super Bowl of course. I popped in to check out Eli Manning and Tom Brady a few times.

Then on Monday, he asked me...Should we cancel our cable - no tv? NO TV?

It didn't take me a minute to answer.

He made the call.

As of today. we are TV free!

At least until September when football starts all over again....
Posted by Alecia Stevens at 8:15 AM