Wanted: The Courage of St. Michael 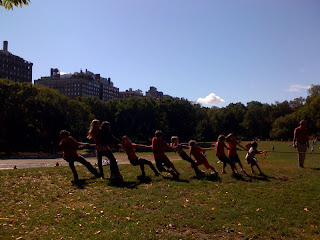 A game of tug of war in Central Park - 1st graders to 12th graders on the same team. Mr. Stevens is the referee. Who says there's no place to play in Manhattan? 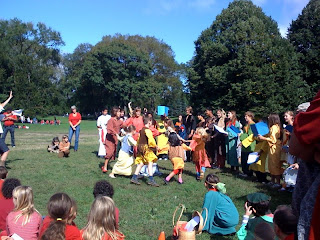 Waldorf children acting out a "The Tale of the Buffalo" 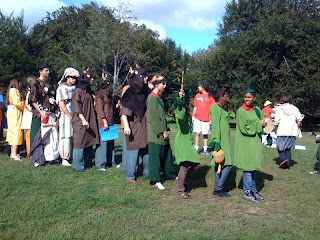 Actors ready to go "onstage". All ages - from 2nd grade to 12th are in this play. 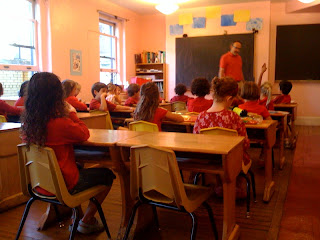 It's been a long week. Then again, it's been a long eight years for some of us. We could use a little courage.The feast of St. Michael, known as Michaelmas, is celebrated mostly in Europe. According to Wikpedia, "The Archangel Michael is one of the principal angelic warriors, seen as a protector against the dark of night, and the administrator of cosmic intelligence." Come to think of it...we could use a little cosmic intelligence, too. Lee told the children a story of Angel Michael today and his courage against the ferocious dragon of evil. You will see him standing with one foot on a dragon and a sword lifted to the heavens. He is there to give us courage as the days grow dark - whether literally or metaphorically so. Seeming a little dark around here lately --- if you know what I mean.

The children are all in red because as Michael swoops across the heavens, his fiery sword touches the tips of the trees and turns them to gold and orange and red - giving us the colors of autumn.

In a Waldorf school, this festival is celebrated every year with the children on September 29, the Feast Day of St. Michael. (Waldorf is not strictly a "Christian" school, but celebrates many of the Judeo-Christian holidays. The curriculum includes blocks on all of the world's primary religions.) It has always been one of my favorite festivals and this one, my first at the Steiner School here in Manhattan was not a disappointment. I love the idea of celebrating courage - not a hawkish, warrior-like courage - but a deep, abiding, inner courage.

Today I watched children from Lee's first grade class meet their "buddies" from the 12th grade, who gently knelt to say hello, then rose to take their hand to lead them off to play games. Soon enough the first graders were galloping on the shoulders of these gentle giants. I watched them work together to create a play that told a Native American story of how man was given care over the earth and all living things. (Right...that happened.)

How quickly the time will pass when the little ones will be the Seniors. Lee's last class of first graders are 22 and just out of college. What courage they need to face the world now and how grateful I am for the Waldorf education they have had. Kids and parents just don't forget a day like this. I know because my own children went to a Waldorf school.
Posted by Alecia Stevens at 7:43 PM