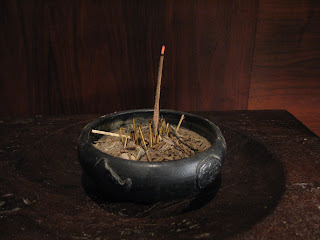 I have a theory which is this: anyone who took yoga in the relative distant past is always looking for his or her first yoga teacher. This is an adaptation of the Freudian theory that all women are looking for their fathers and all men are seeking their mothers. I first started yoga in 1973 in Iowa City, Iowa. I went to a class at a church. It was a long narrow room and the mats were lined up in two rows along the walls of the room so that the teacher could walk between the rows and instruct us personally. Her name? I think it was Barb. I recall exactly how she looked. She was short – maybe 5’2”, slightly stocky, but remarkably flexible and beautiful in a no-makeup kind of way with dark hair, pulled back. And, she was kind and soft and patient. The room was kept dark and quiet.

In 1973, there were no Lycra or leggings. We all wore muslin drawstring yoga pants. They must have cost $7. I probably made mine as I sewed everything I wore then. I guess we wore a t-shirt and that would be it. She burned incense. I presume it was Nag Champa because to this day, I crave the smell of Nag Champa incense in my home. I have a stash of it in Minneapolis. I shopped madly for it in New York and have yet to find the brand of choice. I am sending it by mail tomorrow so it will be there when I next land.

Nag Champa is a positive anchor for me. I burn it every time I clean my house.

Yoga is also an anchor for me.

My husband, Lee, who I met in 1992 and knows that I practice yoga when it is convenient, teases me. “Yes, we all know you practiced with the yogis themselves = in India – in the 12th Century.” Well, he just doesn’t know anyone who has practiced yoga since before the invention of Lycra – that’s all I have to say. That would be moi.

Of course, there is some pressure associated with that fact. IF I have been doing yoga for 35 years why I am I not the most awesome, flexible, pain-free person on the planet? Well, because like many things in my life….I started them but didn’t really keep it up. Motherhood interfered. Divorce interfered. Work interfered. Life interfered. And now I have some aches and pains I barely want to admit to and I am only moderately flexible. I look better in clothes than I do naked. That is the sad truth.

But, whatever….I still don’t own any Lycra yoga pants and never will.

Tonight I went to a class at One-Yoga, a nonprofit studio in Minneapolis, which I have grown to love. Why? Because it has the attitude of my circa 1973 yoga class. The real deal. No aerobics yoga. I was disenchanted when YOGA made the cover of Time magazine several years back. It had become way too mainstream and that bummed me out.

But I’ll go back this week, because there was something a little “Barb” there. There was incense, there was some chanting music in the background, but, mostly, there was very little Lycra. People were in shorts and tees, sweats and tanks. It’s my kind of yoga. She was kind and offered rest. She helped you when you needed it. You shut your eyes and don’t even notice that anyone else is in the room. I may have found my first yoga teacher again.
Posted by Alecia Stevens at 8:38 PM