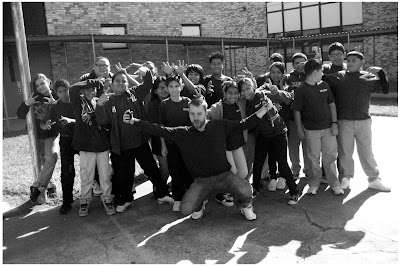 Zan with his 6th grade class in Houston, Texas

My son, Alexander (aka Zan,) is home for the holidays. I have not had a day, an evening, an hour alone with him for over 1 1/2 years. Maybe longer. So long, I have blocked it from memory. So, this is bliss.

Zan is now 24, living in Houston, Texas teaching 6th grade math to under-served Mexican immigrant children in a public school with Teach for America. He has a Business, Economics, and Public Policy degree from George Washington University in D.C. I thought the kid was headed for corporate law and he ends up caring about 13-year old Mexican immigrants and now is applying at schools in NYC and D.C. (He can't take owning a car, which is required in Houston) to teach more under-served kids. (I think "under-served" is the new way to say "under-privileged.")

It makes me want to weep. I appreciate him so much for his compassionate choice. But, then, he's always been the sweetest kid.

He comes home on Sunday night - hangs out here with me eating chili that isn't even that good- and he's not feeling great - fighting a bug - he gets up on Monday morning to work with me ALL DAY installing a client's home. He is schlepping boxes, putting together furniture, breaking down cardboard boxes, running errands, and generally doing whatever I ask. No complaints.

"I'm so happy I get to pay you instead of someone else," I say.

Later that night, bone tired from the day and still fighting the flu, we sat together on the sofa in the library / tv room of our apartment - just Zan and me. (Lee was in Boulder this week visiting his family.) He said, "Mom, this is a really comfortable apartment."

Could you have paid me a better compliment? Making a home for the people we love is the point of my work. If they love it, feel at home, feel easy, we've done our job.

Zan and I have a mutual appreciation society. And nothing could make me happier.

Happy Holidays - and keep looking for those things to appreciate in the people around you.
Posted by Alecia Stevens at 7:03 PM