The News from San Cassione 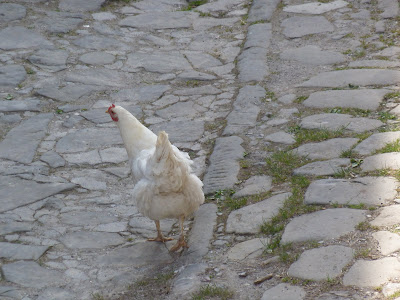 The chicken that hangs out in our road. 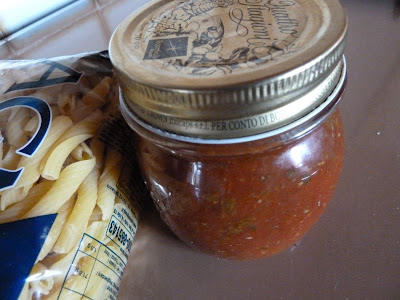 Sugo Gabriella - the tomato sauce our landlord brought to us yesterday. Made and canned in her own kitchen. 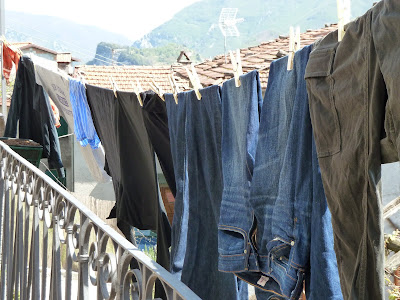 How we spent the day in Italy. Doing laundry. 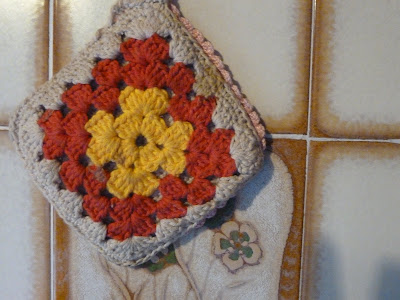 
There is no news that we know of.

Last night, we had a dining experience like none we've ever had. We were a little tire of cooking so went to the local "bar" (in Italy a "bar" is a place where you go get coffee or a drink - usually standing at a bar - and small foods that you might also eat standing. This bar also has a restaurant attached, a terrace overlooking a vast expanse of mountains awakening to spring - pale green powder puffs of leaves coming to life on the hills.

We arrived at the restaurant about 7:30 - and, surprise, you silly Americans! - were the first ones there. They kindly led us to a table on the terrace when we said we would like to eat al aperto. A woman asked us what we wanted to drink - she did not speak English - so I told her vino rosso and Lee asked for a vodka. She didn't know what that was so we went into the bar area with her - and pointed to what he wanted "with tonic". She was puzzled, then realized it was aqua tonica. Within moments, I had my wine and Lee had something resembling a vodka tonic without ice.

She returned to bring us plates, flatware, napkins, olive oil and parmesan cheese in a bowl with a spoon. No menu. I thought we were just very early and they weren't even set up to serve yet. But they were very kind and did not kick us out!

About 10 minutes later, they brought us warm focaccia. It was delicious dipped in the oil. Still no menu. Another 15 minutes and someone brought out a plate of maccheroni. It was covered in Bolognese sauce. It was really more like a ravioli without anything in the middle, a flat pasta about 1 - 2" square. Now we knew we weren't going to get a menu.

Because we had no idea what was to follow we heartily ate of the fresh that day pasta and sauce (we smelled it cooking when we were there earlier that day for cafe.) By the time we finished our share of the pasta (and we didn't finish it!) they brought the Secondi (second course.) Lovely little roasted potatoes and a plate of oh-so-amazing-i-don't-really-know-what-all-it-was roast beef - sliced as thin as paper, perfectly medium rare, drizzled in olive oil and served room temperature. OMG. Well, Lee and I inhaled that, but laughed that really this was quite a lot of food! As we sat back with full bellies to catch a breath, the waitress arrived with the next course! Delicately fried fresh from the garden zucchini and a bird of some kind, which we never touched.

We had to tell the waitress (who was also the cook) that the meal was buonissimo! But, it was a bit too much. We couldn't eat everything! I hope we didn't make an enemy for life. I think she was surprised! I ate as many of the zucchini as possible and have sworn to figure out how to make it! Lee was by now leaning back in his chair to make room for everything he had just inhaled.

When, without warning, two bowls of ice cream pie land in front of us. Well, we have to eat it. Who can turn down a nice Italian dessert when the cook is serving it to you. After 2 hours, we asked for the check, she met us at the bar at the register and told us the bill was 40 euro! That includes 2 vodka tonics and a 1/2 liter of wine.

We paid, with great enthusiasm, walked out into the planetarium sky, made our way home stealthily on the tiny paths back to our home in the dark.

I woke this morning - on our last full day here = and feel a deep gratitude for this place. The woman who owns the home came by yesterday with freshly canned homemade tomato sauce and pasta. I know this isn't some Disneyland version of a medieval Italian mountain village (for awhile I thought it might be) because there is not one single souvenir for sale anywhere! Not a t-shirt saying "I was high in San Cassione" (I can't believe I just thought of that.) No
bobble-head Italian grandmother with a broom, an apron and a flowered dress. Nope. It's all for real. And there seems to be no other news than that.
Posted by Alecia Stevens at 1:04 PM