Where to start? The Anthroposophical Conference in Bologna 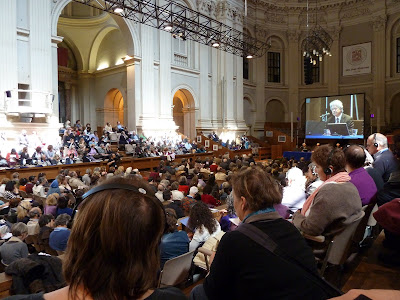 The conference - a rather boring picture, but shows you what my life was like for 24 hours at the International Antroposophical Conference in Bologna, Italy. It really was very interesting and quite the bonding experience for Lee and me. I suddenly know a little bit more about which he is talking. It has mostly been gibberish until now. I do wish you could see all the purple. 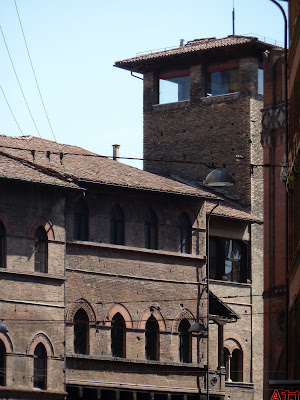 A quick snippet of Bologna archtitecture. 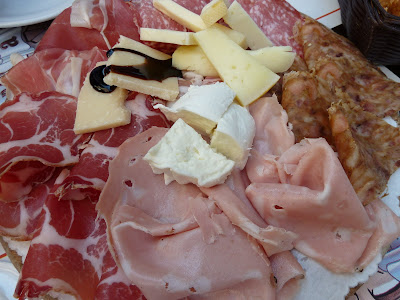 A Bolognese lunch! So perfectly Atkins and delicious.

So, the last couple of days have been funny, entertaining, hectic, moving, insightful, sad, poignant - I'm running out of words.

On Thursday, we left Roma for a conference in Bologna. I think I can safely say that we were both ready. Rome is very grand, but full of very crabby people. That's all I'm going to say about it. We were leaving to go to the Anthroposophical Conference at the University of Bologna.

It was really a trip. (So how do I even explain Anthroposophy? I'll try.) The event was an international conference on the philosophy of Rudolf Steiner, celebrating the 100 year anniversary of what is now called the "Bologna lectures." The amazing thing about the University of Bologna is this: it is the oldest university in the Western World - circa 1088. It is FANTASTIC to think of this.

Many of you know that Steiner (please do say "Shti-nur") created the Waldorf School movement, biodynamic agriculture where the organic standards were more strict in the 1920's than they are today (do you use Hauschka skin care???), Anthroposophical medicine, a new form of movement called Eurythmy, and communities for adults with special needs. He also created a system of Contemplation, which my husband has been practicing for years. Many of you know he is also a veteran Waldorf teacher (20 years and so many great kids!)

So, his "guru" (which is not acceptable in Anthroposophy, actually) was speaking at this event (Sergei Prokovieff) so we figured out how to get there - and we did with a lot of emails written in Italian with my Italian dictionary at my side.

The setting was fabulous. Bologna is way cool! Seems intellectual, slightly leftist (there was a communist rally in the square), very good food (it is called the Breadbasket of Italy), and great architecture. It is much more relaxed than Rome and the vendors / waitstaff are English friendly. (We saw signs posted for English speaking waiters.) This is very unlike Rome. I always start with Italian. In Bologna, they sometimes respond in English and they have this lovely attitude that they get to practice their English with us. Of course, that is what I think when they show patience with my cryptic Italian.

The conference was filled with about 800 people mostly from Europe. I was nervous. This is a quirky group. All white. (Literally.) More women than men - and the average age was probably 50. Most looked and and sounded intelligent. They were largely NOT sensates in the Jungian sense of that term (Meyers-Briggs). My proof is that they couldn't get 800 people to exit the building without my being certain I was going to die in a stampede. There were 3 doors and they only had one of them open. This is the problem of a non-sensate. If I was betting, I'd say it was a room FULL of INFPs. (Introverted, intuitive, feeling, perceivers. This is my husband.) There was a lot of purple I noticed. I'm a designer. I notice color and texture. I'm sitting there in my navy suit with black shell and look out on the crowd and suddenly, purple and something like raspberry jumps out at me. Both women AND MEN are wearing this color.

I suddenly feel like I am on the outside of an inside joke. "Hmmmm," I say to Lee. "What's with all the purple? And don't act like you don't know, buster."

"What do you mean?" he says, like he's been caught.

"I think it's considered a spiritual color," he said and he knew what was coming next would not be easy. He started laughing.

"Grown men should not wear purple. I'm not even sure grown women should wear purple. I feel like I'm at a Barney convention." (Remember Barney from the '80's - the loveable, annoying purple dinosaur on PBS who sings "I love you. You love me.")

He started laughing pretty hard and tried to choke out, "You really need to keep your voice down. This is blasphemy." We now both laughed = mostly uncontrollably and believe me, laughter seems to be a rare commodity at an Anthroposophical conference.

We were fed well - biodynamic food - it was AMAZING! And at only 12 euro for dinner, it was a treat. We also so enjoyed the presentation by an American physics professor at Amherst. He was such an elegant speaker, elegant human being! He knocked our socks off. His speech was on Meditation and The Self. (Part of Lee's dissertation topic.)

His name: Arthur Zajonc - with an uber impressive curriculum vitae. Physics Ph.D., Fullbright, and all round very mellow good guy. We introduced ourselves because we were finally so elated to hear a speech in English (the rest were translated and we had to wear headphones, which seemed very United Nations or something.) He was a gem - looking very smart, happy, peaceful and compassionate. He had some brilliant things to say about the new physics relative to contemplation and spirituality and it was all music to our ears.

Not many interesting photos from this trip, but a bit of a watershed event for Lee - so that made me very happy.

Still more to tell - will write after the pasta fresca with fresh Bolognese, rucula insalata with walnuts and Reggiano. Dinner in the apartment looking at the sunset. 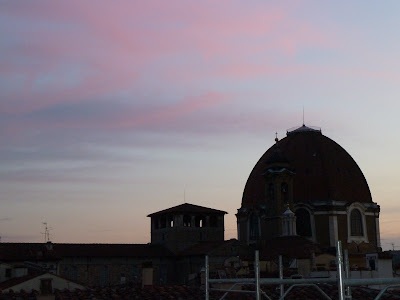 Posted by Alecia Stevens at 1:21 PM