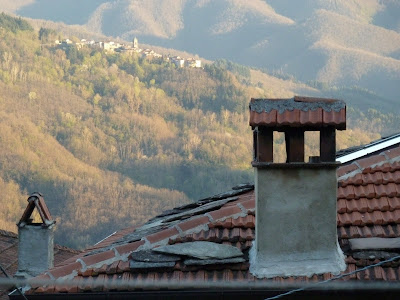 The view off our terrace - toward another little medieval village with bell tower. 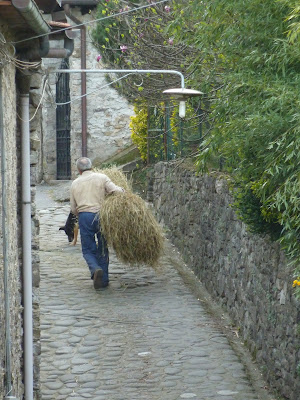 The cobbled street to our little home. Used by chickens, people, dogs and very small cars. 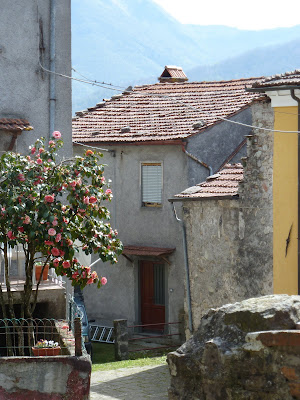 Our "neigborhood". Houses built very closely together here - even though the whole village's population is probably about 350 people. 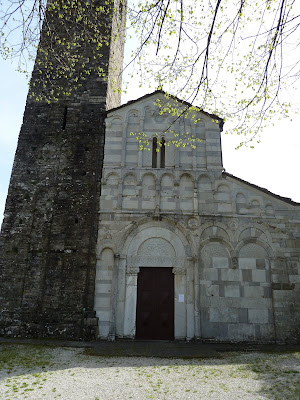 There was a church on this spot as early as 722! Motifs over the doorway are primitive, almost totem-like. So different than images from a Renaissance church.


Last Thursday, we left Florence by train (kissing the door as I said good-bye to our lovely Il Terrazzino apartment) and went to Pisa. There, we picked up a car and began a harrowing trip to a mountain village outside Bagni di Lucca, where Gabriella waited to take us to her childhood home, built in the 16th C. We are here because last summer we made a home exchange with Ron (Gabriella's son) who lives in London. He wanted to go to NY with his girlfriend and would we, in exchange, like to use his ancestor's home in San Cassiano, Italy? Well, it looked cute enough. Sure. Why not? It will force us to go to Italy in the Spring.

We couldn't have imagined what we were getting into. 4 hours after leaving the Pisa train station, and loaded with groceries because we had no idea what would be available in the village; with Lee at the wheel and me on the email trying to decipher directions which, if printed, are 5 pages long and include detailed photos of milestones; after missing many of said milestones and having to drive miles beyond to find a place to turn around on the narrow country roads; upon reaching the turn off to San Cassiano - a road about one car wide and with instructions to honk at the "corners" = which I think of as a point where two roads intersect, but which, in this case means when the curve is so sharp you cannot see around it and therefore must honk so that you don't run into someone coming around the corner, thus careening one of you over the side of the mountain; after all this, for what should have been a 90 minute drive, we arrived to meet Gabriella.

She couldn't have been more lovely, her hair gray, almost a bob, in a loose flowered dress, a patterned bib apron and spectacles, she showed us her family home and spoke in some dialect that merged English and italian - Engalian? She now lives down the hill and this home is for rent and for extended family during the summers.

I was still in some kind of trauma after the treacherous drive up the mountain - I had no idea this is where the home would be! I imagined the quiet rolling hills of Tuscany set off alone on a winding road surrounded by olive trees. Instead we find ourselves in a Medieval village on the side of a mountain - houses perched one above the other as they move up the hill. The road to our home is cobbled, wide enough for a car if the chickens, dogs and people are out of the way. Most people back down the little hill because there is no place to turn around once down it.

Life here seems frozen in about the 1940's but in the form of an ancient village. There are electric lines everywhere and we have perfect wifi. There are only tiny, mostly older cars - Fiats, Volkswagons. It is silent most of the day except for the chickens. The roosters crow in the morning and again in the evening. Clucking can be heard throughout the day. Territorial dogs bark occasionally. And, there are voices, but rarely. We have seen maybe 10 -15 people in the three days we have been here. The largest groups are gathered, talking at the macelleria (meat market) or the little (and I do mean little!) market next door where we buy water, bira, chocolate and potato chips.

It is also exquisitely Spring here. The sun is burning the winter out of us. The sky is brilliantly blue. The house is deliciously cool. THe flowering trees are awake - magnolia, camellia, apple. Happy tulips fill the clay boxes on our terrace.
We have fires at night; once the sun has descended, the mountain air cools quickly. The rooster awakens me. We make bad coffee and drink it on the terrace in plastic cups.

Yesterday I made fresh Bolognese. We eat rucula salads, lots of eggs, and tonight will go to the only restaurant in the village. Mostly, we read, think, talk, write, walk, cook and eat. It is so clear how important this retreat is after the stimulation of Rome, especially. I feel pregnant with ideas. (Much too old to be pregnant with anything else!)

As early as the 13th C, the word "retreat" meant "to draw back", to "withdraw" - especially from a dangerous situation. By the 15th C it referred to a place of seclusion. As I think of the modern world and the toll it takes on us, I can see that retreat is necessary. I have mine here and I wasn't even looking for it.
Posted by Alecia Stevens at 8:30 AM