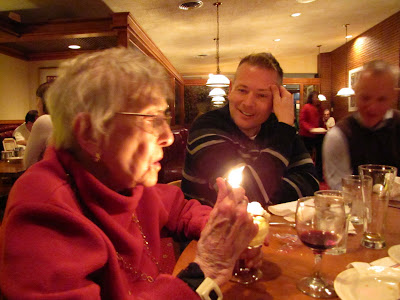 Making her wish. Grandma Fern, Brother Kelly, Tom Clemens
These are three people in the "Light of my life club." 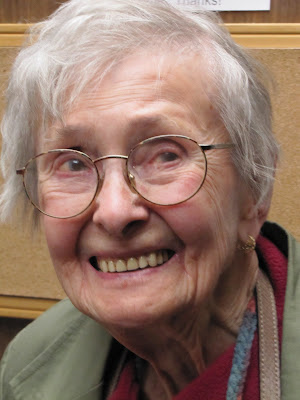 Grandma Fern - 99 years "old." She is the happiest person I have ever known.


(Full disclosure: I am an Iowan by birth, so I assume some right to these observations.)

I don't know where to start. For the last 24 hours, I have been sailing the high seas of familial emotional drama. I have lived through the obsession with food dramas and the living history tour of Colfax, Iowa, my father's childhood home, and the "Italian" dinner at Noah's Ark. As well, I drank the hottest coffee of my life.

I overstate. Which of course my brother Kelly points out to me when he says, "Why is everything in the superlative for you?"

Okay. It included laughing to tears as my brother Rob, who develops products for Target, etc, described his idea for an adult diaper for sports fans who simply won't get out of their seats to go to the bathroom. He would have the six-pack size and the "Super-sized" for the twelve-pack beer drinker. Then there was the horror of recognizing that Iowa women over 65 might as well just wear "the Iowa wig" because EVERY single woman in Iowa over 65 has exactly the same hair. Gray, short, and permed, and something that mimics a helmet, slightly. It is never, ever, pulled behind the ears. It is never, ever long. And there must not have ever been born a curly-headed Iowan, because I did not see one single woman with naturally curly or wavy hair - it was all permed. It goes on. How do I say this? There is a lot of denim and worn on top in Iowa. Denim on the bottom is not so concerning. But anyone over 22 should consider turning in their denim tops. And if it isn't denim in Iowa it is whatever sweat pants are made of. Fleece, right? At restaurants. And a lot of baggy fleecy clothes in general. Like loose tops to cover the years of onion rings. I diverge.

We took my grandmother to the "Italian" restaurant that my father and mother selected - Noah's Ark. It is very confusing. First, what does "Noah's Ark" have to do with Italians? I could see some nice Middle Eastern food, maybe, but Italian?

We start by ordering a round of heavily battered and fried onion rings. To make it seem more Italian, we added heavily buttered (or something oily) garlic bread. (I did not see bruschetta or prosciutto anywhere on the menu.) Suddenly, it was a little bit Italian with garlic in a dish. My mother and I ordered Insalata Romana. It was iceberg lettuce with 3 olives - without pits. I ordered - and I own my mistake - crab cakes. There just really was nothing else on the menu I wanted. Not the fried chicken, which of course is so obviously Italian, but I was in the mood for seafood - in the middle of the country. I asked if it was fresh (it was listed as one of the "specials" so I thought it might be!) and the waiter, who probably doesn't get requests for the crab cakes often, answered honestly. "No, it is frozen." Well, I'm thinking...better frozen in Des Moines, anyway. They came looking like fried hockey pucks with the same dense breading as the onion rings and served with a sauce that was yellow and sweet which I couldn't identify if my life depended on it. I asked for cocktail sauce. I ate one of them and ordered another red wine. At least that seems Italian.

Despite the confusing edibles, we had a marvelous time - I sat next to Grandma Fern and she had at least two memorable lines of the evening. The first was, "Oh, I just can't believe what a wonderful life I have had!" This, from a 99-year old woman who never owned a house or a car in her life, who worked at Dahl's grocery and restaurants, who left her marriage (or was abandoned by her husband) at age 22 with a 2-year old daughter in 1931 and never remarried, but has plenty of good stories.

The next line was when the waiter brought her an ice cream sundae with a candle in it and she stared to dig in with the candle lit. We all yelled, "Grandma Fern, you have to blow the candle out before you start eating it." And as she started to blow, I said, "No, you have to make a wish first."

"I wish for the good health of everyone at this table....and no more war."

I could have cried. What did she know that we don't? She said several times, "Well, you can't believe the changes I've seen?" She is right about that. Then, when she asked about my daughter, Isabelle, who is living in Spain this year, "Is it modern there? Do they have elevators and trolleys?"

"Yes, Grandma Fern, they have elevators and subways. But they also have beautiful old castles and cathedrals and parks that have been there for centuries," I said.

After the Italian dinner I would never have found in Florence, only in Des Moines, we returned to her home - a multi-unit home for the elderly - where she still lives alone in her own apartment. I walked into the building with Grandma Fern's dear friend, Ginny, who is probably in her '70's and has adopted Grandma Fern. She takes her to the doctor, the grocery, church, etc. Ginny had dinner with us so that we might thank her for all she does for Grandma Fern. She couldn't stop talking about her. "She does her devotions twice a day. She has not complained once in the twelve years I have known her - not once. She does her exercises twice a day. (I teased Grandma Fern about having a "trainer.") She goes to Bible Study and Memory class where they all share their memories and hers are the ones everyone loves to hear." Ginny ended by saying, "When I grow up, I want to be like her."

We had cake and coffee in a little sitting area on her floor. As I said good night, she thanked us for coming to share her birthday. I said, "Thank you, Grandma Fern, for living so long that we could do it."
Posted by Alecia Stevens at 6:07 PM