Homage to Alexander and Isabelle (aka Zan and Izzy) 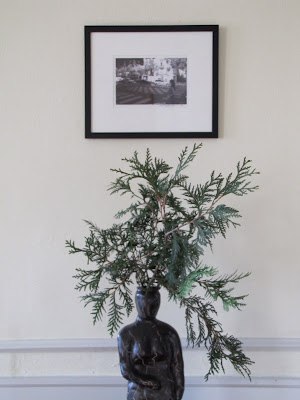 I'm an empty nester. Alexander left for college in Aug 2004 - coincidental to my husband moving to LA -WITHOUT ME! No buried emotional trauma there.

Isabelle left for Madison in August of 2007. Hmmm....I happen to recall yet another mental and physical breakdown at that time - or was that just menopause?

Anyway, I've gotten over most of that - my husband not living with me, choosing LA over me, then NY, my children leaving home and the emotional / hormonal nightmare delusionally called "the change." (That is something like the Southerners who call the Civil War "the late unpleasantness.")

Anyway, I am puttering today - trying to make something nice out of the way too few pieces of furniture I have in Minneapolis. It is a game of chess and I mostly have pawns. No kings, no queens. Not even a knight. A lot of Room and Board outlet store, yard sale finds - ho hum. But, I pick up this crazy piece of pottery Isabelle made in 12th grade in a pottery class which I always thought looked like something Picasso would have done (that's a mother for you) and stuck an evergreen in the hole in the head. I love this piece. And put it on an odd little table I have under a photo that Alexander took when he was studying in Paris. I love this photo. It is of a beautiful young woman walking the streets of Paris - naturally chic and fresh and the little cars that are so common to Europe whirling about in the streets. Zan took it in black and white and gave it to me.

So here is my little homage to my children, who, on this night in November, I rather miss. Isabelle is studying in Madrid, Spain (well, mostly socializing and traveling, I fear) for a year. Alexander is now in Houston (that would be Texas) teaching 6th grade math for Teach for America - it is the hardest thing he has ever done, he says. But he also seems to have a rather buoyant social life with the other TFA kids. I last saw him in July.

When there is still a lot of suffering in the world and 20-somethings are off fighting wars, this simple alter to them is helpful. I am so happy they are alive and healthy and kind and smart and fearless. I want to be like them when I grow up.
Posted by Alecia Stevens at 7:08 PM