Detour - not about Assisi. Today it's all about Rome - Without a Map 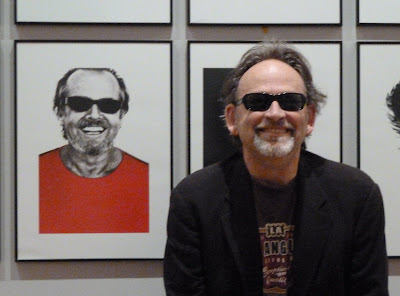 At the exhibit of Karl Lagerfeld's photos at Chiostro del Bramante today. From the series "Portraits." Lee next to his alter-ego. 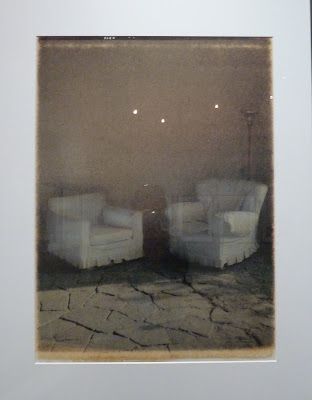 Photo by Karl Lagerfeld. I must have a chair like this! (or is it the room?)

I will write about Assisi later. Today...it's all about Rome. And we did it without a map. We did it with our senses and it was the greatest feeling!

Last night, we were invited to the apartment of some people we met last week - a lovely Australian couple who have lived and worked here for 8 years - both artists. She is a furniture designer and journalist and he is an animator - and creative director. They are darling and I can't tell you how excited I was to get into a Roman apartment. It was fabulous - a palazzo circa 1600 - owned by a principesse -who has restored the building beautifully and lives on one of the floors. It was a one=bedroom - but certainly larger than our apartment in NY. All white stucco walls, parquet floors from the 18th C, old tile floors from the 17th C and filled with a wonderful mix of antique casepieces, the ghost chair, modern slipcovered sofa and chair, refurbished Louis XV chairs and her uber modern lounge chairs in lacquered bent ply wood. All lit by candlelight, with casement windows the size of a door, it FELT Roman.

We had dinner at 9;30 at Osteria del Pegno just west of Piazza Navano. The feeling reminds us of Lucia's, very local, it feels as if you are going into someone's private home for dinner. Huge bouquets of fresh flowers in pitchers. We arrived home at our apartment at 1:00 a.m. The city was still throbbing with people. (We, however, were not throbbing. We'd had too much food and were dragging!)On the way home, we passed through a very lively neighborhood on Via Della Pace that reminded us of the Lower East Side at 3:00 a.m. on a Sunday morning - the leftovers of a Sat night. Wall to wall 20 - 30-somethings, mingling on the cobblestones - you couldn't tell where one bar ended and the next began. We also passed, by accident, a museum that is exhibiting a show of Karl Lagerfeld's photographs. I had to return. (Karl Lagerfeld is now 83 years old, continues to be the designer for Chanel, re-created himself as a photographer in the last 15 years or so and is a creative muse for me. He also may have the best taste of any one in the whole world!) They pointed out their favorite bar - one that serves gin and tonic!

Today, we awoke at 11:00 (we talked last night about the rhythm of life in Rome being so lovely!) read the Times online, had our coffee and went to find the museum with the Lagerfeld exhibit - Chiostro del Bramante. Well...we walked to it like we had GPS! The building was magnificent. Probably 16th Century, but I am not certain. It was that wonderful simple architecture (NOT Baroque, where suddenly everything is dripping with putti (cupids) and gilt. At least that is my impression of Baroque decoration.) This is just so purely about form and material and seems so modern to me. The steps were old gray, pitted flagstones, the railing iron no larger than 1" in diameter, the walls pure stucco - one in a deep raisin color. It made me swoon.

We were the only ones in this beautiful museum! It was such a treat. His photos reflected his work in fashion, often using his models to set up the scene. It was also clearly informed by a romantic sense of the past, of old cinema, of French film noir, of a Monte Carlo from another era. 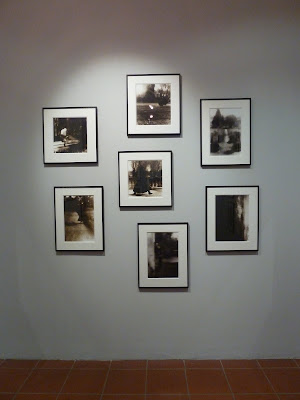 Then, there are the architectural photos - reminiscent for me of some of Alec Soth's earlier work. Seen above of the chairs and here and then the more muscular architectural pieces like Paris below. 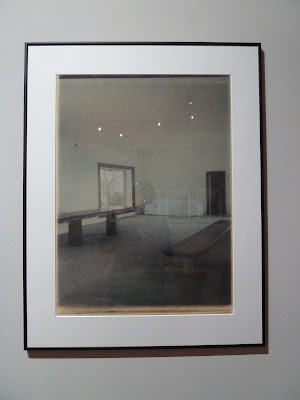 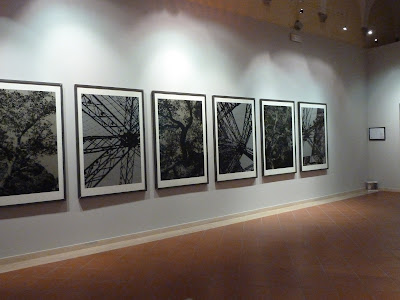 And then..the portraits. Wow. A wall of portraits all displayed together without identification of the subject. And, of course, that gets to be the game...who are these people? Well, one jumped right out at us! You see it above!

After the exhibit, we found the bar that served gin and tonic. I had a bira. Lee broke his streak and had a real live Bombay Sapphire gin and tonic while sitting in the sun on the cobblestones, blissing out over the day, over the fact that we are in Rome, over the people in this part of the city who exhibited some style, and over the effect of the exhibit, an experience of potentia, that which is still possible. We were "vibin' with the city. Our favorite day yet.

And all without a map! 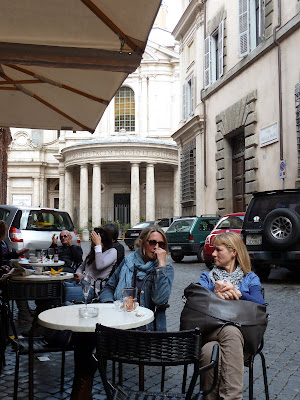 The scene up the street - Via Della Pace - the church is Santa Maria della Pace with a Raphael inside. 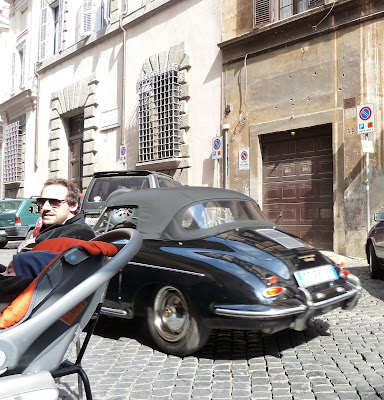 This great old Porsche wiggled its way through the pedestrian traffic while we were having drinks. 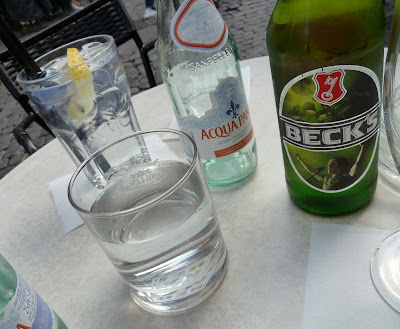 As Lee said, "Absence makes the heart grow fonder." Apparently the gin and tonic was very good.
Posted by Alecia Stevens at 10:39 AM