More on Rome - hope this doesn't start to sound evangelical

Our hosts made dinner reservations for us tonight - but we were so lame, out of it, jet-lagged, that we never found the place - the cabbie couldn't get there because it was only accessible by foot, which is lovely, but we couldn't find where we were supposed to be and ended up at something not only horribly mediocre, but with an attitude. Teaches you a little something about humility. I tried my best to speak Italian and the guy didn't give me a chance. I swear the asshole increased the velocity of his speaking just to bug me. I ordered the dinner that we wanted, but he kept saying that we had to order more. (We didn't want more? Hello.) But, I found something else and ordered it, but I couldn't even eat it. Veal. I thought I might spontaneously become a vegetarian it was so pasty tasting. Besides that, the "vino di casa" sucked.

So we came home and opened the bottle of wine that Alessandro and Jace left for us and tried to have a civilized, intimate conversation about our future. I have a feeling we sounded pretty stupid, we were so loopy by now on the accumulated cocktail of lack of sleep, xanax for flying across that very large lake, wine and Rome. But, the wine they left us was magnifico! Will take a photo of the label tomorrow.

Here are some scenes from walking home from dinner and they more than made up for the attitude of the dumb waiter! Let him try to maneuver New York City. I would never be mean to him! 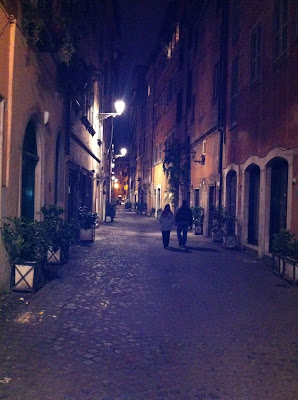 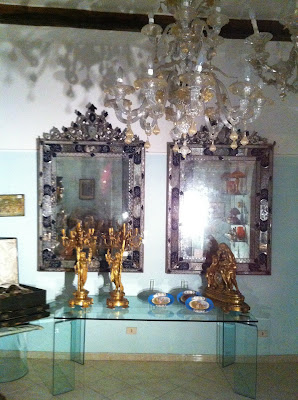 This was in an antique store on the street, above. So beautiful! 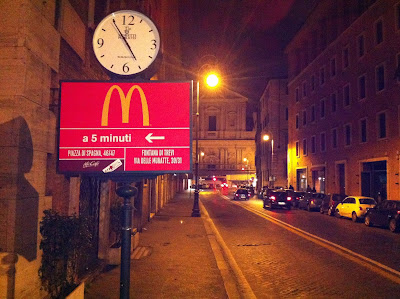 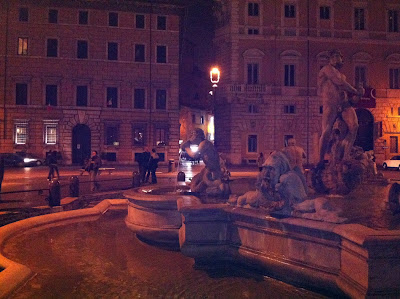 SO, what I want to mention now is the sound of Rome. It is so lovely! While we walked home from the restaurant, it was almost silent - much of the city is closed to cars. Now, from our apartment, there is a lively bar a few doors down and the occasional scooter, but it is mostly so beautiful and quiet. And we think 81st Street in NY is quiet. This city raises the bar on quiet.
Posted by Alecia Stevens at 6:13 PM