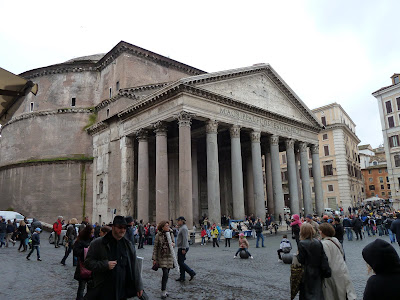 We visited the Pantheon yesterday in the rain - which seems perfect, somehow - with that big hole in the top. It really does open to the sky-the only source of light in the temple built in 162 AD by Emperor Hadrian. Yep - 162 AD. Lee points out this is 1300 - 1400 years OLDER than the buildings we were admiring in Florence a few years ago. AND, not only that - it has been in continuous use since it was built!

"Pan" means "all" and "theos" means "god". (Don't you just love etymology!)
It was built as a temple to all the gods of Rome during this time - then changed into a Catholic church in the middle ages.

Anyway - here's the thing that really got to me. The dome is made of CONCRETE! I thought concrete loft floors and counter tops were sort of very cool and concrete was maybe first used a couple hundred years ago. I was so wrong.

This was in 162 AD! It is still standing! (Think about that engineers of the bridge in Minneapolis!) It is not only sound, it is so beautiful. How did they do it????

The distress part? Well, this kind of architecture, materials, decoration, quality is simply impossible today. We can't even plow our streets and fill potholes in Minneapolis. Chances are slim that we're going to build a new park (or piazza) and hire a Bernini to sculpt a fountain. Chances are slim that any of our clients / us can afford to do the terrazzo tile floors that are smooth and cool under my feet in this 17th Century apartment. Few can even do a plaster wall now. It's sheetrock, sheetrock, sheetrock. And, the windows - these gorgeous casement windows - with built-in shutters. And, the artistry - the mosaics, painted surfaces, drawings and gilding.

It is of the past. And I don't know why but that makes me a little sad. Have we lost something that makes us human when we lose this quality and craft? 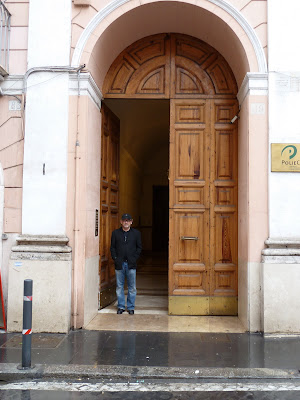 Nice door. The door to our palazzo - Santa Chiara 49. We are on the 4th floor (though they call it 3rd in Italy because the first floor is just the ground floor.)
They don't make doors like this where I come from. 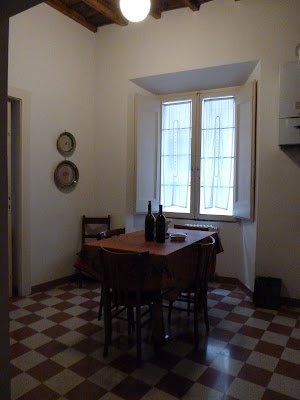 Interior of our apartment - kitchen - just the loveliest windows with built in shutters opening to the inside. 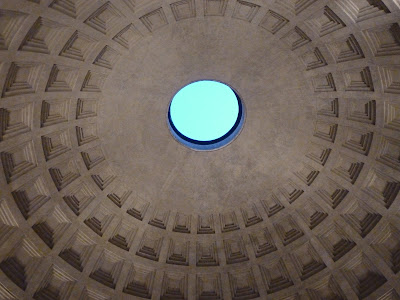 The occulus of the Pantheon built into the ceiling - concrete panels form the dome built in 162 AD. Go figure. 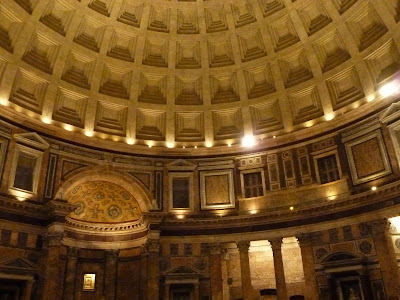 A bit more of the Pantheon interior. 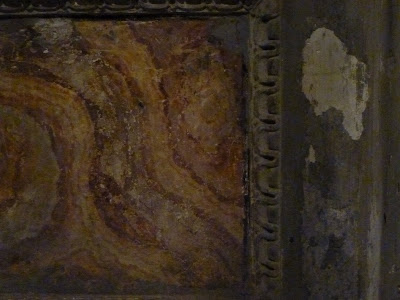 From the church of Santa Maria sopra Minerva. We stumbled into this lovely basilica yesterday. This is a fragment from a wall - decorative marblized painting on the wall. Works here! Somehow this treatment loses its punch on sheetrock in Minneapolis.
Posted by Alecia Stevens at 6:44 AM